Keep is a mobile fitness community that offers a variety of training programs for different groups of people.

For our community’s first visit, we went to Asia’s leading workout & fitness trainer app maker “Keep” headquarters at Vanke Times Center and shared our technologies with developers at Keep Co.

Way back in 2018, Keep had already deployed ShardingSphere capabilities such as sharding and read/write splitting in multiple application scenarios for its diversified lines of business.

With the release of Apache ShardingSphere 5.0, the concept of Database Plus and pluggable architecture has to some extent, reshaped the ShardingSphere ecosystem. During our visit, we conducted in-depth exchanges and discussions with our counterparts at Keep.

Database Plus: Freeing DBAs and Developers

Database Plus is a design concept of the distributed database system. By building a standard layer and ecosystem for use and interaction above fragmented heterogeneous databases, and by multiplying and expanding computing capabilities (e.g. data sharding, data encryption and decryption), all the interaction between applications and databases is oriented to the standard layer built by Database Plus. This results in shielding the differentiated impact of database fragmentation on upper layer transactions.

Pan believes that the global database industry has boomed thanks in large to the following two reasons:

In terms of business, to ensure sustained visits and transactions growth, underlying databases must respond to requests as soon as possible. In addition, the breakup of microservices and subsequent modification of corresponding databases also generate demands from the business side.

DBAs are responsible for running the whole business and data system, including data security, backup, distributed governance, and API smart monitoring of data clusters. If the middle layer can meet transaction traffic and understand the request, DBAs can modify the request accordingly and then more operations can be performed. Therefore, we need to strike a balance between the two sides of demand to carry transaction traffic and support database capacity building, thus creating an efficient, collaborative ecosystem between the two sides.

Taking data encryption and decryption as an example, we can see how they are generally done at the business layer because MySQL and other databases do not support encrypted algorithms themselves. This means encryption & decryption is only be achievable at application and business layers. However, this poses a problem if we consider complex online businesses that face considerable tasks when they upgrade their encryption algorithms.

The best solution to this problem is to encrypt and decrypt data at the middle layer. ShardingSphere-Proxy can be directly bound to databases, be placed at the middle layer between applications and underlying databases. ShardingSphere-proxy will feel “DB-like” by taking advantage of protocols that are compatible with different databases, thus deciding which node the SQL quest will fall on, letting upper layer applications be programmed for ShardingSphere, and shielding the impact of underlying databases. Data is in plaintext status when the transaction sends a request, but it will be encrypted after going through Proxy and decrypted when being retrieved. 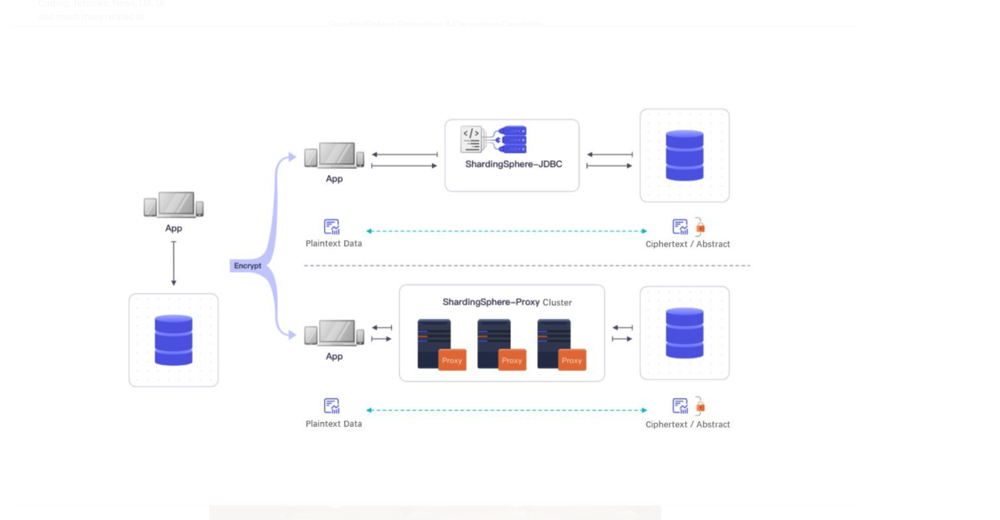 As such, the ShardingSphere encryption and decryption process can be separated from the existing system of applications and databases and can be linked with special encryption algorithms, especially in the cases where a cipher machine is involved. ShardingSphere capabilities such as encryption can free significant amounts of DBAs’ and developers’ time, allowing them to focus more on businesses.